Corrosion is the gradual destruction of material, usually metals, by chemical reaction with its environment. In the most common use of the word, this means electrochemical oxidation of metals in reaction with an oxidant such as oxygen. Rusting, the formation of iron oxides, is a well-known example of electrochemical corrosion.

This type of damage typically produces oxide(s) or salt(s) of the original metal. Corrosion can also occur in materials other than metals, such as ceramics or polymers, although in this context, the term degradation is more common. Corrosion degrades the useful properties of materials and structures including strength, appearance and permeability to liquids and gases.

Corrosion of metals and alloys results in oxidization or selective removal of a material from a surface.  Repairing corrosion is a billion dollar business that affects many industries, such as: automotive, aerospace, biomedical devices, paints & coatings, and semiconductors.

Materials characterization and surface chemical analysis tools are used to:

Plating, painting, and the application of enamel are the most common anti-corrosion treatments. They work by providing a barrier of corrosion-resistant material between the damaging environment and the structural material. Aside from cosmetic and manufacturing issues, there are tradeoffs in mechanical flexibility versus resistance to abrasion and high temperature. Platings usually fail only in small sections, and if the plating is more noble than the substrate (for example, chromium on steel), a galvanic couple will cause any exposed area to corrode much more rapidly than an unplated surface would. For this reason, it is often wise to plate with active metal such as zinc or cadmium. Painting either by roller or brush is more desirable for tight spaces; spray would be better for larger coating areas such as steel decks and waterfront applications. Flexible polyurethane coatings, like Durabak-M26 for example, can provide an anti-corrosive seal with a highly durable slip resistant membrane. Painted coatings are relatively easy to apply and have fast drying times although temperature and humidity may cause dry times to vary.

If the environment is controlled (especially in recirculating systems), corrosion inhibitors can often be added to it. These form an electrically insulating or chemically impermeable coating on exposed metal surfaces, to suppress electrochemical reactions. Such methods obviously make the system less sensitive to scratches or defects in the coating, since extra inhibitors can be made available wherever metal becomes exposed. Chemicals that inhibit corrosion include some of the salts in hard water (Roman water systems are famous for their mineral deposits), chromates, phosphates, polyaniline, other conducting polymers and a wide range of specially-designed chemicals that resemble surfactants (i.e. long-chain organic molecules with ionic end groups). 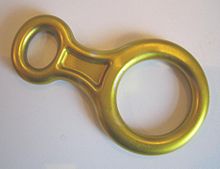 Climbing descender was anodized with a yellow finish

Aluminium alloys often undergo a surface treatment. Electrochemical conditions in the bath are carefully adjusted so that uniform pores several nanometers wide appear in the metal’s oxide film. These pores allow the oxide to grow much thicker than passivating conditions would allow. At the end of the treatment, the pores are allowed to seal, forming a harder-than-usual surface layer. If this coating is scratched, normal passivation processes take over to protect the damaged area.

Anodizing is very resilient to weathering and corrosion, so it is commonly used for building facades and other areas that the surface will come into regular contact with the elements. Whilst being resilient, it must be cleaned frequently. If left without cleaning, panel edge staining will naturally occur.

A new form of protection has been developed by applying certain species of bacterial films to the surface of metals in highly corrosive environments. This process increases the corrosion resistance substantially. Alternatively, antimicrobial-producing biofilms can be used to inhibit mild steel corrosion from sulfate-reducing bacteria.

Controlled permeability formwork (CPF) is a method of preventing the corrosion of reinforcement by naturally enhancing the durability of the cover during concrete placement. CPF has been used in environments to combat the effects of carbonation, chlorides, frost and abrasion.

Cathodic protection (CP) is a technique to control the corrosion of a metal surface by making that surface the cathode of an electrochemical cell. Cathodic protection systems are most commonly used to protect steel, water, and fuel pipelines and tanks; steel pier piles, ships, and offshore oil platforms. 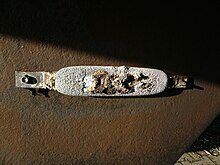 Sacrificial anode in the hull of a ship.

For effective CP, the potential of the steel surface is polarized (pushed) more negative until the metal surface has a uniform potential. With a uniform potential, the driving force for the corrosion reaction is halted. For galvanic CP systems, the anode material corrodes under the influence of the steel, and eventually it must be replaced. The polarization is caused by the current flow from the anode to the cathode, driven by the difference in electrochemical potential between the anode and the cathode.

Anodic protection impresses anodic current on the structure to be protected (opposite to the cathodic protection). It is appropriate for metals that exhibit passivity (e.g., stainless steel) and suitably small passive current over a wide range of potentials. It is used in aggressive environments, e.g., solutions of sulfuric acid.

To enable certain features and improve your experience with us, this site stores cookies on your computer. Please click Continue to provide your authorization and permanently remove this message.