Tests the electrical paths of a device or package 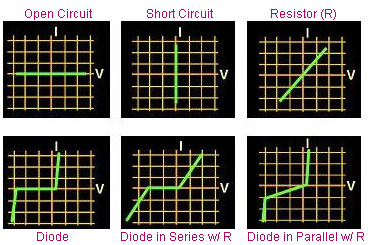 Curve tracing is very useful in failure verifications and in the early stages of failure analysis. It can identify electrical failures that exhibit abnormal voltage-current relationships at the output pins.   A curve tracer is usually used with two probes, one for each of the nodes that define the electrical path being characterized. 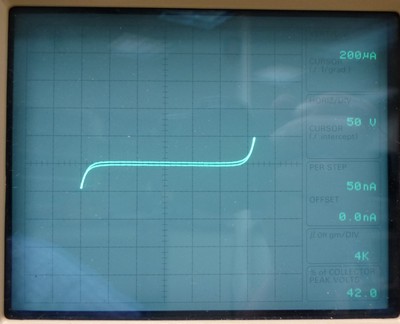 When performing curve tracing on an integrated circuit, one of the probes is usually attached to a reference pin as the other probe is rotated among the other pins, i.e., it is connected to each of the other pins one at a time.  The voltage-current (V-I) curve of each pin of the device under test (DUT) with respect to the reference pin is then compared to that exhibited by a known good device (KGD).  The analog ground (AGND), +Vs, and -Vs pins are usually chosen as reference pins since they are nodes that are, more often than not, common to all the other pins.

Interpreting a V-I curve is not difficult.  For example, an electrical path that projects a horizontal line at I=0 on the CRT display is an open circuit, since the current level remains at zero even if the voltage is varied from a negative to a positive value. On the other hand, a vertical line along V=0 indicates a short, since the voltage stays at zero regardless of the current level.  A purely resistive path would show a straight, diagonal line, with the reciprocal of the slope of the line equal to the resistance value (R=V/I).  Curve tracing is likewise a convenient tool for locating the breakdown voltages of a p-n junction, or even show the beta curves of a transistor.

Curve tracing can also be done on an electrical path inside the die circuitry itself, where the nodes defining the electrical path are not connected to any external pins.  Microprobing is then employed to achieve electrical contact with the selected nodes, with the probe needles also attached to the curve tracer. 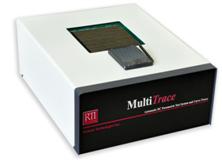 To enable certain features and improve your experience with us, this site stores cookies on your computer. Please click Continue to provide your authorization and permanently remove this message.